“I have been working as a sub contracting site manager for a number of years, but have been finding it increasingly difficult to obtain work in the last few years, even with other qualifications I have gained. As my skills and knowledge has been learned on site. I was unsure about the profiling system as CSCS’s own information is not the most straight forward or forthcoming when dealing directly with them. However the information and support I received from William was first class. The guidance notes he provided were invaluable and made completing the paper work while still time consuming, easy to understand. I have now gained my CSCS Construction Site Managers Card with no problems from CSCS. Their independent assessor passed my paper work in a few days, sending me an acknowledgement of such. My card arrived in the post yesterday well with in the 28 expected day. I would like to conclude by giving William my great thanks and say I would recommend Rivasure to anyone in my position..”

“Mentoring – A Tool For Personal Development”

“Thanks for sticking with me”

E-learning Course Direction – I did it my way and then I did it the RivaSure way!

“Delivers what it says on the tin”

I found it an open and flexible experience (video)

“Scepticism for a mature learner put to bed-Candidate Gainfully Employed”.

“Thanks for sticking with me”

" ... is to build into candidates, via our online learning and mentoring programmes, management qualities and knowledge that will produce managers that complete on time, to cost safely, for the betterment of all stake holders on their projects." William Simpson, Senior Course Lecturer and Assessor 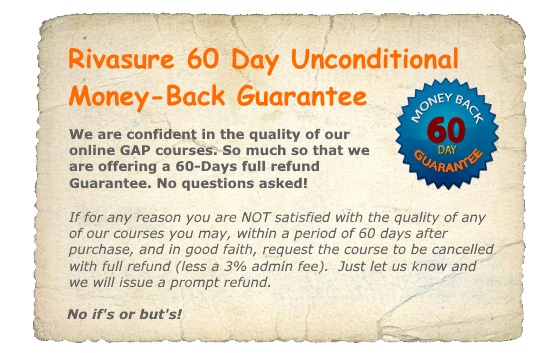